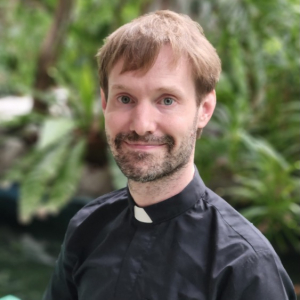 Fr. Zach relocated to Thailand in 2021 after spending most of his life in Durham, North Carolina, in the USA. He served on the leadership team of two Episcopal churches in America before joining St. George’s, first as an ordinand and then, following his ordination, as Assistant Chaplain. His journey toward Anglicanism began in his early twenties when he attended a Compline service at an Episcopal parish. He was immediately drawn to the beauty of Anglican prayer: at this service, there was Gregorian chanting, and the chapel was mostly dark, the choir illuminated softly by candlelight.

Not long after this experience, he started attending an Episcopal campus ministry while an undergraduate at UNC Chapel Hill, where he studied English literature. He officially converted to Anglicanism during graduate school at Duke University, where he earned a Master of Divinity and completed his seminary education.

Zach’s journey toward the priesthood was by no means easy. He wrestled with doubts about his vocation for years, and it took him quite a long time to find a diocese where he felt entirely at home. By God’s providence, he found St. George’s in January of 2022, through a casual Google search. At the time he was on the verge of giving up on the priesthood and had come to Thailand to teach English for one semester while contemplating a change in career path. But after feeling welcome and at home in the St. George’s family, and at the timely suggestion of Deacon Lloyd, he decided to pursue ordination under the supervision of Fr. David Price, who graciously served as his mentor in the ministry.

While serving as an ordinand at St. George’s, Zach’s vocational doubts vanished, thanks in large part to Fr. David Price, whose commitment to the Anglican liturgy inspired him.

He was ordained on June 5th, 2022, by Bishop Vsevolod Lytkin. Zach’s interests include theology and contemplative prayer, and he believes strongly that every Christian—and not just monks and nuns—can deepen their intimacy with God through contemplative prayer. He is also an English teacher and works for a public high school in Sriracha.