St George’s congregation is very pleased to announce that Mr Zach Story has joined the congregation as an Ordinand.

As many of you may have seen recently, our ministerial team has grown recently; this is a blessing.
We are delighted to confirm that Mr Zach Storey has joined us as an Ordinand, and under the most excellent supervision of our Chaplain, Fr. David Price, Zach will be in a position to complete his formation.
Zach will also be supported in his journey along his Road to Ordination by Fr. Tom McCusker III, the former chaplain of St George’s.
Zach hails from the USA and the Episcopal Anglo-Catholic tradition and has a great deal of formal theological education and experience that the parish will inevitably benefit from.
Over the coming weeks and months, we will work together to see Zach fourish to fulfil his calling as he reaches the end of the beginning part of his life-long development in ministry.
We hope that you will join us in welcoming Zach to St. George’s.
To see more, click here: https://stgeorgespattaya.com/about/the-team/ 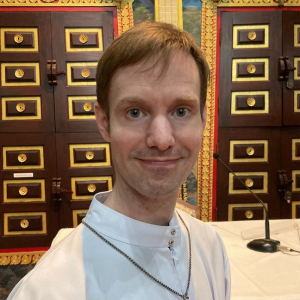 Zach has been living in Thailand since April 2021 and works as an English teacher in Si Racha (ตำบล ศรีราชา), in the same province of Chonburi where St George’s is located.

He originally planned to teach for one semester and, afterwards, to return to his hometown of Durham, North Carolina, but after falling in love with Thailand and being welcomed into the St. George’s community, he has decided to stay indefinitely.

Zach studied English literature at the University of North Carolina at Chapel Hill, where he was first drawn into the Anglican fold through an Episcopalian campus ministry.

He holds a Master of Divinity from Duke University and has been on staff at two Episcopal parishes in the US: St. Joseph’s in Durham, North Carolina and St. Michael and All Angels in Savannah, Georgia.