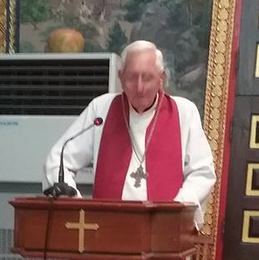 Born in Sydney ( not hatched) on June 5th, 1943. At the age of seventeen entered a Catholic monastery and aged twenty was selected to study in Rome. After two years in Rome, I left and was received into the Orthodox Church and ordained a priest in September 1966.

He went on to serve in North Africa and Europe for 14 years including 8 years in Greece.

He returned to Australia in 1980 and was received into the Anglican Church in the Brisbane Diocese.

In 1992, with the emergence of HIV/AIDS, he started a spiritual healing service for people living with the virus and St Alban’s became a totally integrated congregation opening the doors to everyone, irrespective of the clothing they wore.

Fr. Theo retired to Thailand and lived in Bangkok before moving to Pattaya in 2006.  It was then that he got involved in establishing St. George’s, Pattaya.

During this time, the congregation became involved in assisting the underprivileged and children living with HIV/Aids. This would not have been possible without the assistance of the amazing Liz Shepherd.

From 2006 took over the congregation for the next 9 years assisted by Fr. Tom and Fr. Bill.

Fr. Bill took over upon the retirement of Fr. Theo