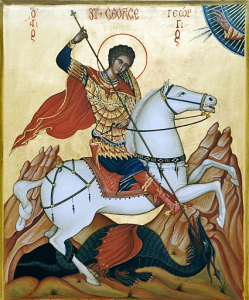 Saint George is the patron saint of England.

He’s popularly identified with England and English ideals of honour, bravery and gallantry – but actually he wasn’t English at all.

Very little, if anything, is known about the real Saint George.

Everything about Saint George is dubious, so the information below should be taken as mythical rather than real.

Despite popular belief, St George is not English. Very little is known about the actual man – or at least, there is no evidence of his existance.

George would likely have been a soldier somewhere in the eastern Roman empire, probably in what is now Turkey.

According to legend, he was martyred for his faith under Emperor Diocletian in the early fourth century, and his major shrine is located in Lod, Israel.

Yet the Roman church had its doubts.

In the sixth century it declared that George was “one of the saints who were rightly reverenced by men, but whose deeds were known only to God”. However, this intervention had little effect and legends associated with St George spread through Europe.

Early Christians were known to exaggerate the tortures endured by their martyrs, but St George is in a league all of his own. According to one source, St George was torn on the rack, hit on the head with hammers until his brains oozed out, forced to drink poison, torn on a wheel, boiled in lead, and much else besides – all over a period of seven years.

A fifth-century decree attributed to Pope Gelasius declared that, lest it give rise to mockery, the details were not be read out in church.

Others included Theodore, Demetrius, and Mercurius. All of these saints had been soldiers when alive, and continued their patronage of the Byzantine army in death – especially St George, who became the most popular.

Crusaders to the Holy Land in 1099 adopted this tradition of military saints, and brought the veneration of St George back to Western Europe.

St George had some competition…

Although St George was well known in early medieval England, Edmund the Martyr, Gregory the Great and Edward the Confessor were chief contenders for the title of the country’s patron saint.

His name means ‘earth-worker’ – that is, farmer – and his feast day of 23 April is in the spring, when crops are starting to grow. Many people throughout European history have prayed to St George for a good harvest.

The earliest legend that features St George rescuing a princess from a dragon dates to the 11th century. It may have started simply as a way to explain icons of military saints slaying dragons, symbolising the triumph of good over evil.

For the permanent association of St George and the dragon we have to thank the Golden Legend, a popular collection of saints’ lives written in the 13th century.

This was a translation of a book by Jacques de Voragine, a French bishop, which incorporated fantastic details of Saints’ lives.

Another tradition has it that a fierce dragon was causing panic at the city of Silene, Libya. In order to prevent the dragon from devastating people from the city, they gave two sheep each day to the dragon, but when the sheep were not enough they were forced to sacrifice humans instead of the two sheep.

The human to be sacrificed was elected by the city’s own people. The king’s daughter was chosen to be sacrificed but no one was willing to take her place. St George saved the girl by slaying the dragon with a lance.

The king was so grateful that he offered him treasures as a reward for saving his daughter’s life, but George refused it and instead he gave these to the poor.

The people of the city were so amazed at what they had witnessed that they became Christians and were all baptized.

As a patron of crusading, St George easily became the quintessential knight. And every knight needs to serve a lady – who better than the Blessed Virgin Mary herself?

Edward I is ultimately the reason why St George ‘became’ English

As a crusader, Edward I (r 1272–1307) acquired an affinity for St George, and back in England outfitted his troops with the St George’s cross when fighting the Welsh. He raised St George’s flag over Caerlaverock Castle in Scotland in 1300, among other things.

Later, Edward III, hoping to revive the glories of his grandfather’s reign, founded the Order of the Garter under the patronage of St George.

King Henry V (r 1413–22) was especially devoted to St George, as is reflected in William Shakespeare’s play. The idea later arose that St George had actually appeared to the English during the battle of Agincourt in 1415, which was a stunning victory for them against the French.

The Reformation was not kind to St George

Even King Edward VI himself mocked the legend as improbable. But the poet Edmund Spenser, among others, kept George’s legend alive as a romantic and nationalistic story. And it is one that shows no signs of losing its appeal.

He is patron saint not only of England but also of Aragon, Catalonia, Georgia, Lithuania, Palestine, Portugal, Germany and Greece; and of Moscow, Istanbul, Genoa and Venice (second to Saint Mark). He’s also patron saint of soldiers, archers, cavalry and chivalry, farmers and field workers, riders and saddlers, and he helps those suffering from leprosy, plague and syphilis. In recent years he has been adopted as patron saint of Scouts.

Commonly depicted as a dragon slayer, the iconography can be interpreted as representing the inner struggles of a life of faith.

God of hosts,
who so kindled the flame of love
in the heart of your servant George
that he bore witness to the risen Lord
by his life and by his death :
give us the same faith and power of love
that we who rejoice in his triumphs
may come to share with him the fullness of the resurrection. Amen.
Finally
For those who use the image of St George or St George’s flag to promote a racist/bigoted agenda, remember, it was not English blood that flowed through his veins!

Next Event starting in: